Facebook is a public limited company, which means that every 90 days it publicly announces its earnings and how it is performing.

For tech companies, looking at their share price usually gives you an indicator of how they are performing. Here’s Facebook’s share price from the last five years: 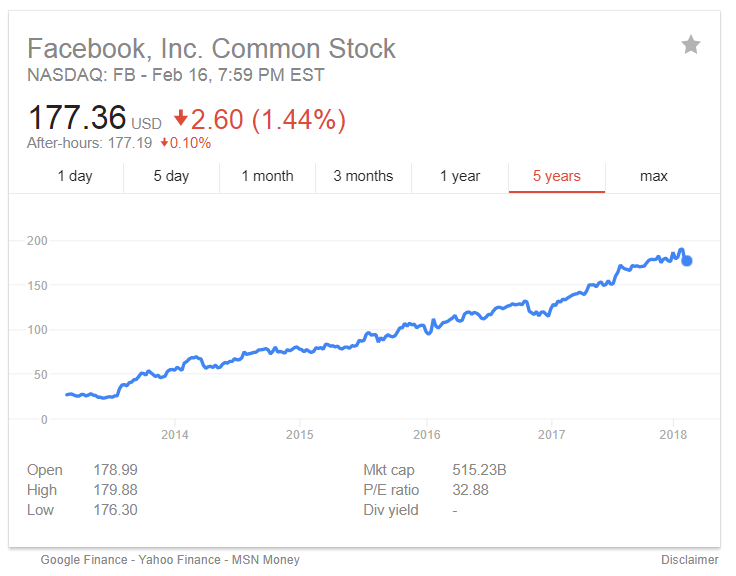 In this article I’ll go over Facebook’s Q4 earnings in 2017 and tell you what it means for marketers going into 2018.

The price of ads just went up (and by a lot)!

The average price for a Facebook ad in Q4 rose by 43%, but don’t freak out – that’s expected and healthy (for shareholders and marketers).

The fourth quarter is where the biggest seasonable and sales holidays sit: Black Friday, Cyber Monday, Thanksgiving, and Christmas.

So there’s no surprise that their ads jumped in cost, and it won’t come as any surprise that in Q1 the price of an ad will deflate slightly.

Facebook’s Chief Financial Officer, David Wehner, went on record to say that the total number of impressions and page loads from ads increased by 4% from the year before.

For the first time in three years, Facebook’s payment services grew by 7% to $193m.

The reason for this growth is due to Facebook attracting more users to buy and sell products. They said that more than 700 million people use their platform each month for that.

Facebook is not focusing so much on their payment services yet, but in the next 5-10 years this will be an interesting space to look out for as advertisers. Imagine if Facebook lets users add a credit card to their account which allowed them to buy items directly from ads within just a few clicks.

Yes, maybe that’s a ways away, but a marketer can dream.

Profits are up but visitors are down

Even though Facebook knocked their earnings revenue out of the park, the biggest talking point was that the average amount of time a user spent on their website went down.

Mark Zuckerberg said that users in total spend about 50 million hours per day less on the platform, which is around two minutes per day per worldwide user.

Some of its users are complaining that they are seeing a lot of irrelevant content from brands and pages and not enough content from friends and family, which is causing people to spend less time on the platform.

I don’t think this is anything to worry about for marketers (or investors) as Facebook is already taking action to improve this by making several updates to its news feed over the week, including reducing click-bait posts and updating their news feed in 2018.

The people behind Facebook are clever. They are already making changes to improve the amount of time spent on the platform with updates to their news feed and the introduction of new platforms like Watch, a free service to watch long-form video content.

This is the first time in years that they have seen the total amount of time spent on Facebook decrease, even though profits are better than ever.

Personally, as a marketer, I’m not worried as things are always changing and you have no other choice but to adapt.

I can’t wait for their first hardware product to launch in May and all the new ad features that will come out.

What do you think?