In today’s article I’ll be giving you a breakdown on how Facebook and YouTube video ads work, the differences between them and when to use them.

A Facebook video ad is simply an advert in video form.

You can choose to run video ads using the video views objective which optimizes your ad to ensure it’s shown to users who are most likely to watch your advert.

You can also run video ads under other objectives such as conversion or traffic when your goal is to drive users to your website or make a certain action on your site. In these cases your ad will be optimized for your intended action with the creative being your selected video.

Over the past few years Facebook has added several placements specifically for video including stories, suggested videos and in-stream videos: 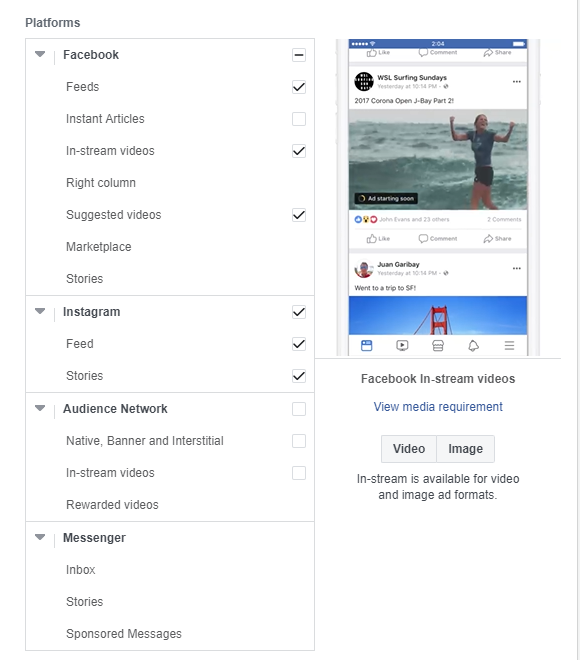 Each video ad is automatically set to play on your audience’s newsfeed or selected placement as soon as it appears on their device. They are not required to click in order for the video to play.

Typically, a Facebook video ad is much cheaper to run than most other ad types. In the image below you can see the cost per 10 second view being compared to sending traffic to website objective targeting the same audience which results in a much higher cost per action:

Facebook users can watch your video ad on Facebook and carry on scrolling down their newsfeed to be served more ads (making Facebook more revenue). Most other ad types redirect users away from Facebook (and on to your website) leading to a higher cost.

Facebook uses a cost-per-view bidding model with  10-second, 2-second and ThurPlay bidding option. This means you’re only charged per view if the user watches 10 seconds or more of your ad or per 1,000 impressions if you choose the 10-second setting.

Have you ever come across videos on Facebook and saw that they received thousands of views compared to organic posts that barely reach 2% of your entire fan base?

Native and video ads is what Facebook pushes advertisers to promote and offers incentives (lower ad cost, more organic engagement) for doing so. As video content takes much longer to produce and costs more, it’s typically of a much higher quality than a image or text update and is given preference within Facebook’s algorithm.

How to use the correct bidding options when running video ads

If you decide to use the video views objective, Facebook will deliver your ads using the following optimisation:

ThruPlay – optimizes your ad delivery to serve your video to people who are most likely to watch it in its entirety if the video is 15 seconds or shorter.

10 second video view – optimizes your video ad to be shown to users who typically watch 10 seconds or more of a video.

2 second video views – optimizes your video ad to be shown to users who typically watch 2 or more of a video. 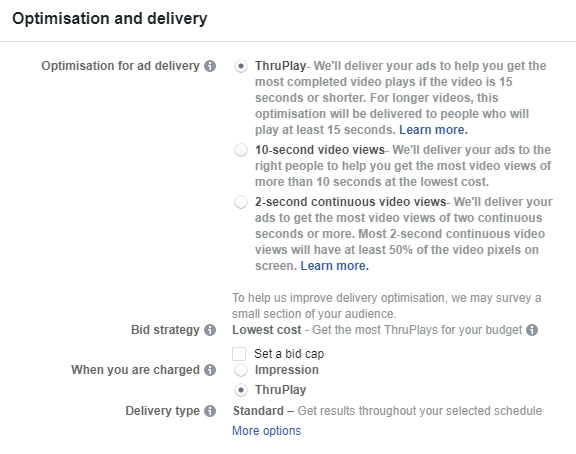 If your goal with the video is to get people to consume your video, ThurPlay and 10 second views are recommended. If you want to build big retargeting audiences or if your videos are under 10 seconds, you can optimize for 2 second video views.

All videos are served on Facebook and you can retarget users based on how much of your video they watched. Users do not need to visit your website or app to be retargeted, it can be done directly off Facebook which is a huge plus.

YouTube uses TrueView video ads and offers viewers the choice to watch your videos. If they don’t watch, you don’t pay, it’s as simple as that. TrueView offers two types of ads, they are:

In-stream – these ads play before or during a YouTube video. Users watch the first 5 seconds of the ad and then have the option to keep on watching or skip it all together. You’re only charged for the view if the user watches 30 seconds of your ad or fast forwards to the end.

In-display– are video ads which are served while other YouTube videos are being watched. In-display video can also be served within the Google Display Network. You’re only charged for in-display ads if the viewer watches the ad.

Three biggest key differences between Facebook and YouTube is what each consider a vie,  the placements your ads are shown on and how you can target your audience.

All Facebook video ads are auto-play and while you’re charged per 10 second view, 2 second view or ThurPlays, any video that is played longer than 3 seconds is counted as a view.

YouTube audiences are more likely to be consuming content with sound, whereas Facebook users may be in a public area or on a device with limited sound reducing your video’s effectiveness. The simple solution to this it so to provide text-overlay which works amazing well.

What about targeting?  Facebook’s targeting options are much sharper to reach your audience than YouTube, if you want to serve ads to a very niche audience, you’ll have a much better time using Facebook than YouTube.

For example, here are the options you can choose to target an audience with when promoting a YouTube ad:

You can to choose to target by location, people’s web activity, age, gender and interests.

Age is separated into groups and you have no control over targeting specific ages. What if your average customer is aged between 30-40? Using YouTube ads you’ll be forced to serve ads to users as young as 25 and as old as 44 wasting value ad spend.

Compare that to Facebook where you can select the exact ages you want to target, serve ads to re-targeting audiences much easier and hone in better on geographical location using maps: Facebook also has the feature to target users based on behaviors, again this is not possible using YouTube TrueView.

Every Facebook ad is served to users who have an active account, this means Facebook has information on their users allowing them to serve your ads to the people most likely to make your intended action. YouTube serves ads to everyone they can and is why you can see the unknown parameter within their targeting.

You can create the best video in the world, but it’s of little value if you cannot accurately target the right people.

This is without mentioning that a large portion of YouTube’s audience are teens, not ideal if your target market is older or mature adults.

YouTube TrueView ads can also be blocked by various ad blockers reducing your reach, there is no ad blocker software for Facebook.

Facebook and YouTube are the two biggest social sites in the world, both providing their own benefits for businesses. If you want to create video content that you want shared on other social media sites, forums, blogs and websites then YouTube allows you to aggregate your videos on any platform.

Which platform is better for engagement? Another study conducted by SocialBakers found that Facebook videos receive 40% more engagement and offer a number of objective types that help you align your video with the right objective. For example, if you created a video with the goal to raise awareness for your brand, you’ll have a better job at achieving that goal using Facebook than YouTube.

Facebook in my opinion is the solution for direct response marketers who want to leverage video ad units to generate acquisition, whereas YouTube is still a great solution for companies looking to reach specific eye balls.