You can’t blink in 2016 without Facebook launching a new ad type or marketing tool. Speaking of tools, if you’re reading this article, I guess you want to learn all about Facebook’s latest marketing tool: Audience Overlap.

If this is the first time you’re hearing about it, or aren’t sure how to use it, in this article I will reveal all.

What is Audience Overlap?

Quite simply, Audience Overlap allows you to take up to 5 different audiences and learn the percentage overlap between them. For example, if you have a website custom audience and a lookalike audience, Audience Overlap reveals how many users are in both.

You can compare the following with Audience Overlap:

To view the overlap of any 2> audiences, each audience must have at least 1,000 people in it. At this moment in time you cannot compare overlap between interests, behaviors or Fan Pages. However, there’s nothing stopping you from creating a saved audience that focuses on targeting users who have a specific behavior or interest.

How you should be using Audience Overlap

The most difficult Facebook ads to run are ones aimed at cold prospects (people who have yet to be introduced to your business). With so many variables to consider, you can end up spending quite a bit of time and money before you see any ad success.

Now you can use Audience Overlap to take some of the guesswork and variables out of the equation. For example, let’s assume you manage an online ecommerce store selling sports clothing. You already have a custom audience of past website visitors which contains 100,000 people.

You decide you want to use Facebook to target new prospects. So you select a number of behaviors and interests and save that audience. Before Audience Overlap you would run the ad and wait for impressions to give you an idea on how well you targeted your audience.

It’s not uncommon to have custom audiences for prospects at various stages of your sales funnel.

For example, you have a custom audience of people who visited your website and never bought (A), another audience of customers who have purchased before (B), and a final audience of lookalikes (C).

Now you can find the percentage overlap and exclude them at the ad-set level to reduce the ad fatigue and costs by not serving irrelevant ads to users.

Select two or more audiences you wish to check for overlap then click on Actions > Show Audience Overlap:

In the example below I’ve cross-checked the amount of users that have visited this delivery business’s grocery page and their meal plan delivery page: 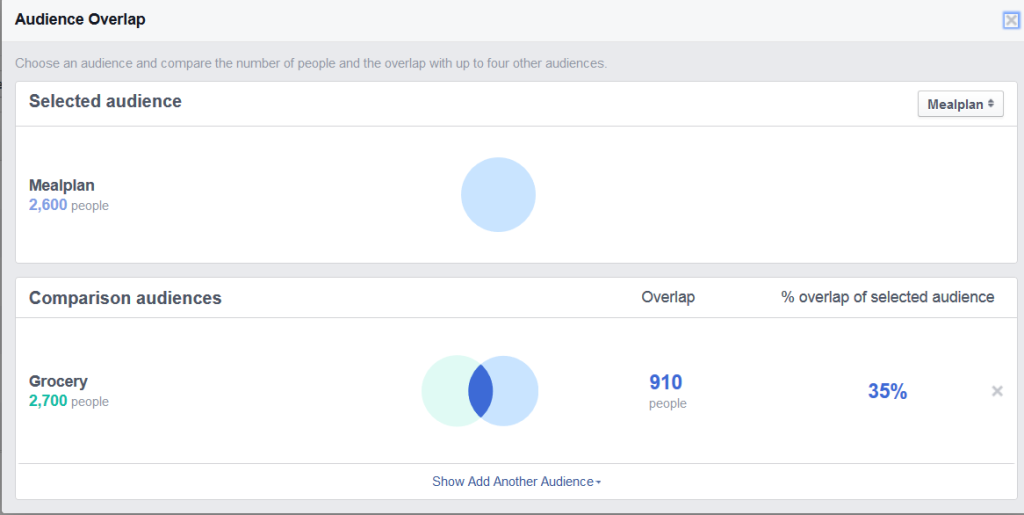 It shows an overlap of 35% which reveals that a lot of their users may not know about the other services they offer.

In the next example below I’ve compared a custom audience of all website visitors against a lookalike audience of 1% which was taken from their email list: 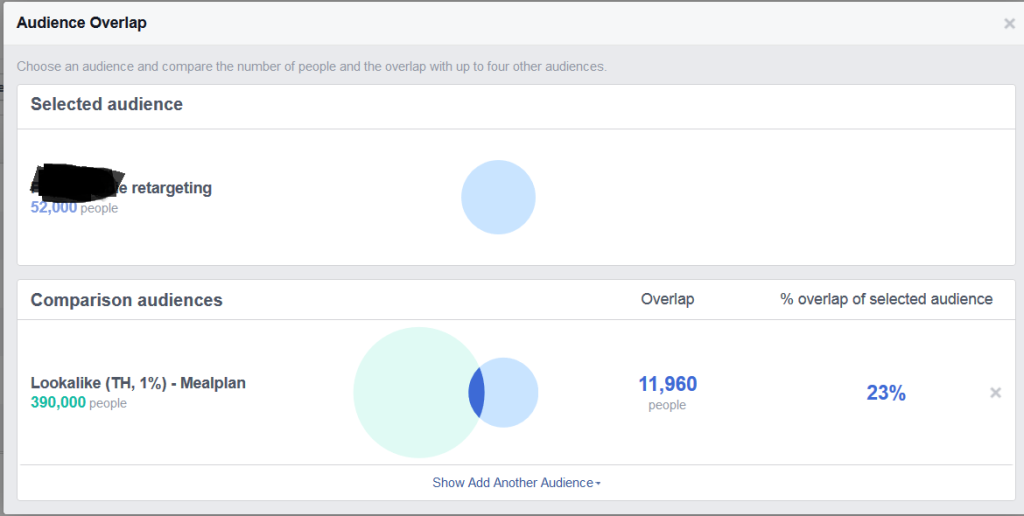 Here we can see an overlap of 23% which indicates that the lookalike audience will be very powerful in generating new business. If that lookalike was 1-10% than we may have to go back to the drawing board to find a better targeted lookalike audience.

Grow with Bamboo have looked across dozens of accounts and created a benchmark of the average overlap by audience type: 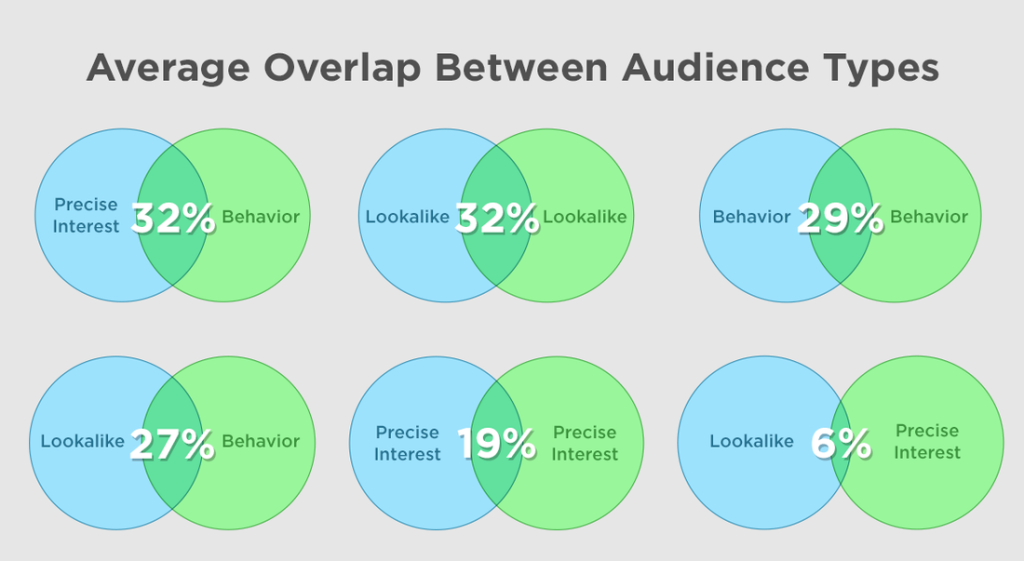 The biggest audience overlaps occur between precise interests and behavior along with lookalikes against lookalikes. The sample size is only over a dozen or so accounts so I expect their to be further and more concrete data in the coming months as Audience Overlap becomes more widely used.

You should be using Audience Overlap before you run any ad campaigns on Facebook to track and provide assurance that you’re targeting the right people. You’ll always receive some sort of overlap and it’s not necessary and good or bad thing but rather depends on your campaign’s goal.

How many Facebook audiences do you have and what does it tell you about the way you capture and find new prospects?