Are you running ads on YouTube that aren’t being watched enough or are always skipped?

In this article I’ll discuss what it takes to get views on your YouTube ads and how to think about the bigger picture when creating video ads.

This article will not talk about the micro elements of creating effective YouTube ads, like thumbnails or how to shoot videos; instead, it will cover how to tell a story with YouTube video ads on a macro level. 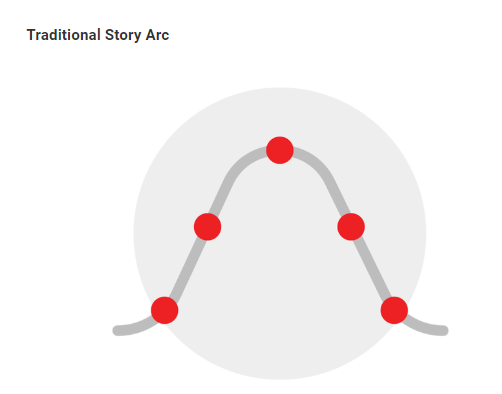 It is a slow buildup that leads to the finale or pay-off (the product or key message) before tapering off with a call to action (CTA).

This traditional story arc method is dying because of the smartphone. When watching a TV show that cuts to an advert, do you sit there and watch every ad or do you go and do something else or pick up your phone while waiting?

The way people consume content is changing, and this method is not effective online.

When your ad is playing on YouTube, there are over a dozen different videos that people can click on without having to watch your video, along with alerts from other social media and messaging apps on their phones that can divert their attention.

A more effective and creative story arc to use on YouTube is the emerging story arc, which looks a little more like this:

Visual language – As opposed to spoken language, this uses visual elements that communicate ideas and meaning to the viewer.

Supers- They are an introduction to your video, which is usually shown in text to grab the attention of the user and give them context on what to expect if they keep viewing.

Pacing- It is used to ensure the flow of the video fits with what is happening on the scene. A mistake that many advertisers make is to show something on the screen for too long, which is ultimately boring to the user.

Contrast and Framing- These elements of your message need to be tight to ensure your ads get noticed even on small mobile screens or when users are in low-lit rooms.

Netflix does a great job at this, which you can see in the video below. They have hit on all these elements within the first five seconds of the ad:

With the added sound, they give the viewer FOMO (the fear of missing out), which sets the tone for them to watch more of the video.

Build for attention – The length of the video is extremely important when trying to reach a wide range of audiences. We know that both short videos (six seconds in length) and long-form videos (120 seconds+) work well, so businesses should be focusing on both.

The main ingredient to ensuring that you get both short-form and long-form videos is to have a compelling story that resonates with the viewer in their time of need.

Creative in context – In a short interview, Matt Lindley of YouTube said that it’s important to put your creatives into context based on the customer journey.

For example, if you’re running a YouTube ad to someone who hasn’t heard of your business before, you should focus your story on the brand and the pain points you will solve for people rather than a direct response ad that leads to a product page.

On the flip side, for users who have visited your website and watched other videos, a more direct video with a strong CTA would work better.

If a user skips a video, that is their way of telling you they don’t like that video, so what video will you show them next?

For example, if they skipped a long-form video, perhaps the next video should be a short-form video with a completely different message to see if it resonates better.

If a viewer watches your video, you won’t want to show them the same video again. Show them the next message in your story to move them down the funnel. Do you have a YouTube funnel in place to achieve this?

Note that the younger generation tends to gravitate more toward story lines and visuals, and do not seem to care as much about the production value of your YouTube ad. In contrast, the older demographic still values a well-polished, professional video.

Think of your YouTube funnel as one long story broken into several videos that are shown to viewers as they pass through each stage.

When creating effective YouTube ads, you need to come up with a well-thought-out funnel that moves users from awareness to considering purchasing your products or services.