Advertisers who have been using Facebook for a long time have been screaming for new placement options on which to serve their ads, and Facebook has responded nicely with in-stream video ads on the Audience Network.

In this article I’ll talk about what this new placement is, what type of content you can advertise, and why now is the perfect time to take advantage of the Audience Network.

How in-stream video ads work on the Audience Network

When you hear the Facebook Audience Network as a way to serve inventory to prospects, you probably have the following expression on your face:

The Audience Network has come a long way since its birth in 2014 and now includes new Facebook platforms like Watch (which I’ll discuss later).

Videos are shown pre-roll, mid-roll, or post-roll across selected apps and websites.

Facebook has stated that over 70% of videos that are 15 seconds or less in length have been watched on the Audience Network using the in-stream format, with sound being turned on most of the time.

There are two placements where your in-stream video ads can be shown. They are:

In-stream is within organic videos that users are watching. In-article is between pieces of organic articles within Instant Articles.

These placements are ideal to generate brand awareness, but are not as useful for direct response as you will not be able to provide a link for users to click.

The in-stream videos placement isn’t all positive. Keep in mind that you’re disturbing a user’s experience on Facebook as they consume content. Ensure that your videos aren’t too sales-heavy and are shown to super relevant audiences to minimize any negative impact on branding.

How to use the in-stream placement

To serve your videos in-stream, within the placements section on the ad set level you’ll see the following option: 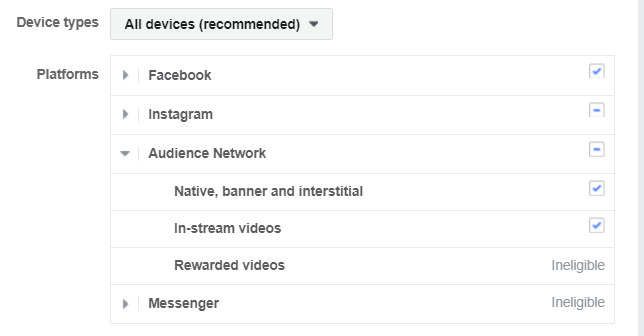 Simply tick the in-stream placement option to serve your inventory to mobile users who access third-party sites that are connected with the Audience Network.

The Facebook Audience Network contains millions of third-party publishers. If your brand doesn’t want to be associated with certain publishers (i.e. those in the dating, gambling, mature, or social issues industry), you have the option to exclude your content from being shown on such websites and apps.

If you want to block other sites, you can manually upload a block list of URLs and apps that you don’t want your ads shown on. Keep in mind that Facebook cannot guarantee 100% success in blocking your ads from sites within your block list.

3 tips to using the in-stream placements

Test hard – A lot of marketers will skip the in-stream placement because they already have a pre-conceived notion that the Audience Network is junk and a waste of money.

Earlier this month Facebook introduced Watch, which is their new platform to serve TV shows on Facebook. While in its teething phase with access to the US only, the quality of engagement of users on Watch is a much higher quality than a user playing a game on their app and coming across your video.

By latching on to in-stream early, you can buy super cheap inventory while everyone else keeps away. Test various videos with different messages to see which type of content works best to maximize your ROI.

Audit your ads correctly – By default, you have to select the newsfeed placement when running in-stream video ads. When auditing your campaign to measure its effectiveness, look at the in-stream placement separately to see how users are engaging with your video.

Creatives – Nobody likes an ad appearing mid-way through them consuming content. Showing a poor-quality video to the wrong audience can harm your brand.

To start with, I suggest targeting a narrower audience than usual to ensure your ad is personalized and the user will be interested. The second thing would be to generate a product or brand awareness message with your video instead of going with a direct response to cold audiences, since you cannot place CTAs.

Your turn to test

It’s going to be interesting to see how the Facebook universe responds to in-stream video ads.

If you’re really conscious about your brand and how this placement will impact your image, and if you can afford it, serve the ads to similar prospects in another country who have no idea who you are.

You can gauge their response to make an educated guess on how users in your actual target market would feel.

As with all new placement options, I urge everyone to get out and start testing. Inventory will be cheap and competition will be sparse.