According to recent reports, in 2017 Instagram more than doubled the amount of influencer posts.

In this article I’m going to discuss what is happening on Instagram right now with influencers, show you some data, and provide a few tips on how your brand can work with and create influencers to drive more sales.

Let’s look at the data and demographics

A Klear study found that the amount of posts on Instagram that contained the hashtag #ad or #sponsored doubled in 2017. 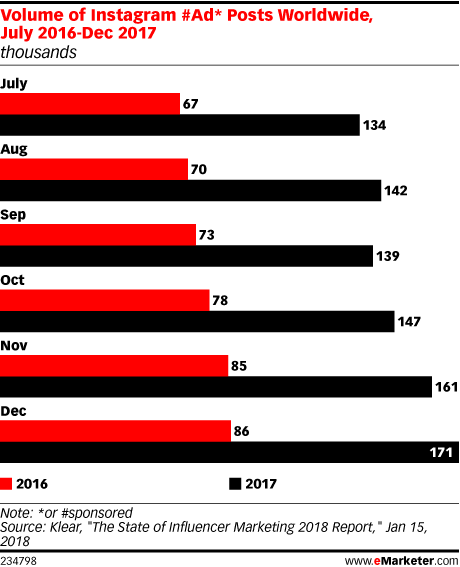 Combined, all posts with the #ad or #sponsored hashtag received around 1 billion likes in 2017.

The study also revealed that the average age group of an Instagram influencer is between 18 and 34, with the bulk of influencers (42%) being between the ages of 18 and 24.

84% of influencers in the study were female, which doesn’t come as much of a surprise when you learn that the top two niches for influencer marketing on Instagram is fashion and accessories.

The Klear report found that 25% of all influencer posts were related to the fashion or clothing accessory niche.

Where is influencer marketing heading?

It appears that FTC regulations made very little impact as the amount of influencer postings doubled and Instagram increased their number of daily active users each quarter.

A Business Insider report stated that influencer marketing spend in 2022 will hit anywhere between $5-10 billion.

Influencers tend to have much higher engagement per post than brands, sometimes by as much as 5.7% across numerous niches.

Before influencers became the hot thing on Instagram, users would follow their friends and celebrities or brands.

But now you can find Instagram influencers for just about every niche, and because they are able to personalize their content and users can relate to a human being much better than a brand or company entity, it’s why we are seeing this shift.

A-list movie stars such as Kevin Hart, Dwayne Johnson, and Will Smith don’t show you what it’s like to be a movie star on their Instagram profile – they push out motivational content to inspire their fans and include the odd promotional piece for a new movie they are doing.

Before, users followed brands to keep up to date with their products; today, they follow influencers because they offer more authenticity than brands and create personalized content they can relate to.

Build your own influencers

Instagram influencer marketing is just beginning to take off, and you don’t want to be left behind.

There are many ways you can acquire influencers, from renting out pages on social media, to reaching out to influencers in your niche, to creating your own in-house influencers.

Be it employees or C-level executives, look within your brand to see who you think would make great social media influencers.

Before Instagram, Steve Jobs – while being the Apple CEO – was also a huge influencer in the smartphone space.

Today you have people like Gary Vaynerchuk who run companies but also have segmented themselves as motivational and internet personalities.

If you want a long-term ROI from influencer marketing, figure out ways to create your own influencers within your brand as well as working with others.

The proof is in the pudding: the added layers of regulation for influencer marketing has done very little to stop brands from working with top influencers.

If your brand sells lifestyle products (fashion, health, travel, luxury), then to really squeeze the value out of Instagram you’re going to want to join forces with influencers and create your own in-house influencers.

How did influencer marketing work for you in 2017?