There has been quite a bit of talk this month about Facebook testing a new messaging app called Threads, which focuses on bringing together you and the people you care about most.

Facebook didn’t comment about the app, but in this article I’ll discuss what we know so far.

Threads is a new messaging app that aims to get users to share personal content such as photos, videos, location, travel speed, and even battery life with close friends.

For example, if you have 500 followers on Instagram or have a public profile, you may think twice before posting a story because you may not want all 500 followers to see, especially if it’s something personal.

The close friends feature overcomes that hurdle, ensuring only your closest friends see your content.

I love the concept of Threads, as many of us will have various types of people following us on Facebook or Instagram, such as:

Depending on your level of privacy, you may not want everybody who follows you to know you have a new job, have just moved house, or are in a relationship.

Because many people have different layers of followers, a lot of people don’t post updates on social media, which leads to spending less time on the platform.

It also goes against the philosophy of Facebook, which is to share and bring people closer together.

Threads is designed to bring you closer together with the people who matter most to you.

Here’s a snapshot of what the app may look like IF released, according to The Verge: 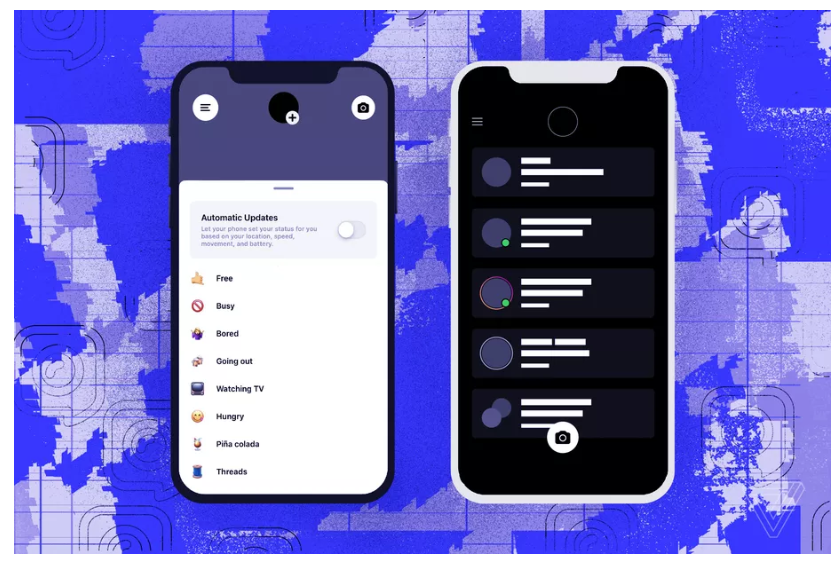 Threads is set up to encourage users to update their status with their close friends. It even has an opt-in feature to automatically share updates based on your location and speed without having to do anything.

You’ll also be able to update your status manually and see Stories from your close friends on Instagram.

A beat for Snapchat?

It then came out with SnapMaps which allowed its users to share their location with friends and provide locations on where they had taken their photos.

Facebook is taking one of their core features and applying it to Threads, maybe as a plan to get younger users to their platform, for which the numbers have been declining.

Being able to share location and speed will be incredibly useful for friends who are meeting up, and sharing the phone’s battery life will be useful for nights out or when you’re in contact with someone but they are unable to continually have their 4G on because of limited battery life.

I can’t tell you how many times I’ve waited for a friend who told me they are just a few minutes away when in reality they were further away.

One of the primary reasons why users don’t post on social media is because they are worried about who will see it or what others will think.

Creating an app that promotes messaging to your close friends and family is a wonderful idea.

Sometimes we may be shy to reply to a friend’s story because we haven’t talked to them for so long, but if you’re in their close friends circle it creates more intimacy.

Instagram found that users are more likely to reply to a close friend’s story than a regular story, because of that added layer of connection by placing them in their close friends list.

Facebook has not mentioned when this app will go live to the public, but I cannot wait to use it!