When someone asks me what a good conversion rate for Facebook ads is, I usually reply with: How long’s a piece of string?

There are so many variables to take into consideration that you cannot use an arbitrary percentage as a benchmark for your own business – at least in my opinion anyway. Here’s why:

If there were two identical businesses selling the same product and running the same Facebook campaign, and the only difference was that one business targeted users in Manhattan, New York, and the other in Bangkok, Thailand – who would have the better conversion rate?

The business in Bangkok will have a much higher conversion rate because there are fewer advertisers in Thailand (a third-world country) than the USA.

Location is just one of many things to factor in.

What conversion are you measuring?

For example, if you run ads to a blog post, your goal may be to drive traffic to your website, to capture prospects’ email addresses, or to get prospects to watch 50% or more of the video on your landing page.

These are top of the funnel conversions and will have a much higher conversion rate than if you want a user to make a transaction at your store.

A WordStream study of 256 US-based businesses found that the average conversion rate on Facebook was 9.21%. 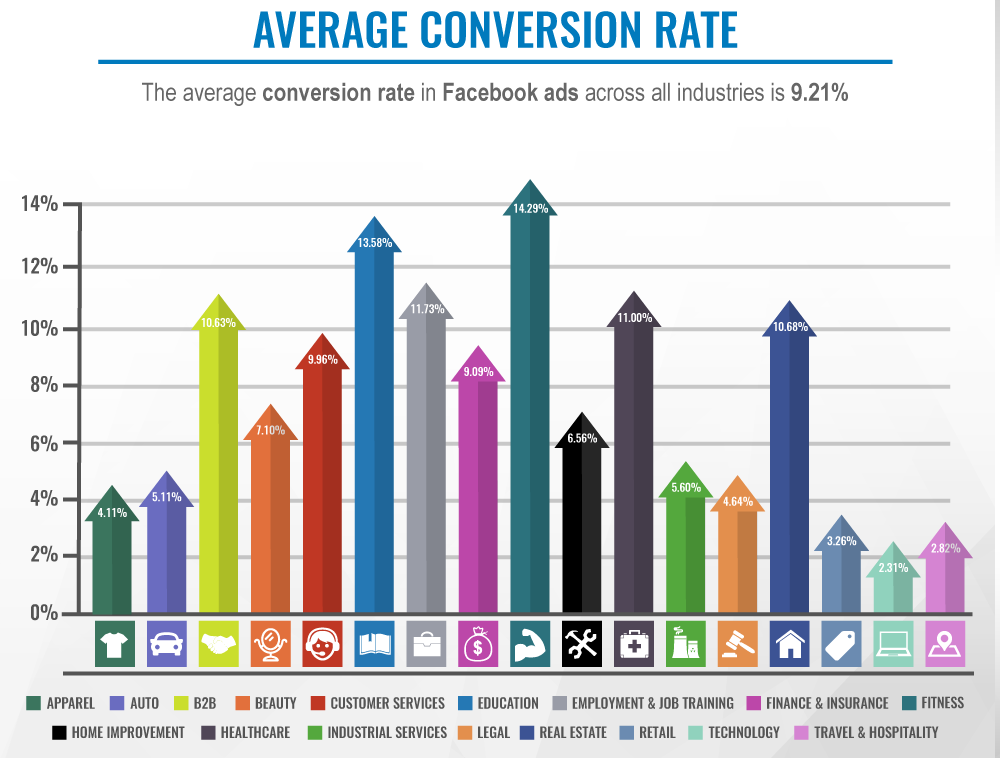 This 9.21% conversion includes everything from page views, opt-ins, direct calls, video views, sales, and other actions that businesses want to achieve.

A conversion on Facebook does not always mean a sale; it can be a range of goals.

The highest conversion rates happen lower in the funnel

Generally speaking, the further a user is in your funnel, the easier it is to get the conversion.

For example, showing product ads to audiences who have never seen your product, with the objective to make a sale, will usually result in low Facebook conversion rates. Less than 3% of entire website traffic converts on their first visit.

Shoppers will research several stores and research the price and ponder before buying, which means the conversion rate for Facebook ads for cold audiences is going to be in the low, single digits.

By showing a product ad to someone who has consumed 75% of a product video and viewed the product on your store and added it to their cart, they are going to be much easier to convert on Facebook and your conversion rate will be in the high, single digits or perhaps even the low, double digits with the right campaign.

Where the user is in your funnel will be a big factor in what sort of conversion rate you’ll get with Facebook ads.

Don’t be blinded by conversion rates on Facebook and kill winning campaigns because your percentage is low.

The conversion rate is useful when it comes time to scale and optimize your campaign, as you have a benchmark to work with and can measure if your changes resulted in positive results.

Ultimately you should be looking at your ROI and not an arbitrary conversion rate percentage on Facebook.

For example, does a 1% conversion rate on Facebook sound good to you?

Ignore the conversion rate percentage on Facebook and look at the only thing that matters: are your Facebook ads providing you a profitable ROI?

Finding your ROI for sales is easy math, but when your conversion goal is to generate email addresses or get people to watch 75% of a video, what is a profitable ROI for that? That requires more thought and a deeper analysis of your Facebook funnel.

There are dozens of benchmark reports that will tell you what conversion rate you should expect and in which niche, but all these reports should be taken with a grain of salt.

The location of your business, your audience, ad spend, offers, and product margins all have an impact on conversion rates.

Are you running Facebook ads for your business but not sure if your ads are turning a profitable ROI or if your ads can be improved? Get in touch with the MuteSix team today for a free consultation.